Puppy Covered in Chemical Burns Cared for by Brother Wolf

(Asheville, NC – March 13, 2019) An abused puppy named Hope is now in the loving care of Brother Wolf Animal Rescue after being found in a trash bag outside of a McDonald’s in Tennessee, covered in what appear to be chemical burns.

Brother Wolf learned about the puppy shortly after she arrived at Friends Animal Shelter in Newport, TN. For the past several 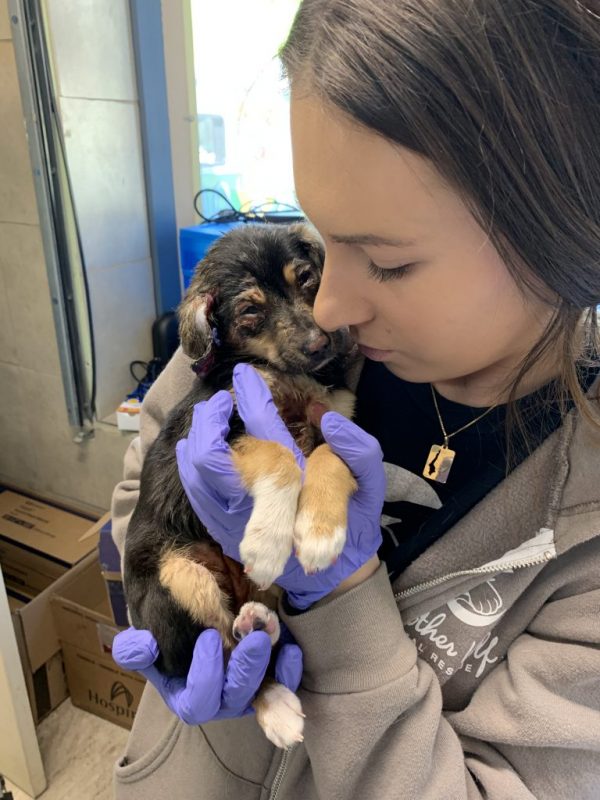 months, Brother Wolf has been assisting the shelter with efforts to assess and rebuild their resources after an abrupt leadership change that left them scrambling to provide adequate care for their animals.

“What happened to Hope is horrific,” says Audrey Lodato, Brother Wolf’s Director of Animal Care. “Thankfully, since we have been helping Friends Animal Shelter through their transition, they knew they could call us for help. We were able to ensure that Hope would get the urgent treatment she needed in order to have the best chance at survival. At just 2 months old, she has already known so much fear, pain, and suffering. We wanted her to finally know love and compassion, for perhaps the first time in her life.”

During an initial exam by Brother Wolf’s veterinarian, Dr. Megan McAndrew, it was determined that Hope’s treatment would include pain medication, antibiotics, topical ointments, wound flushes, and potential surgeries.

“Unfortunately, we recently discovered that her damaged skin is sloughing,” says McAndrew. “It may take up to two weeks to determine the full extent of tissue damage after such a severe burn. This means that we will continue to monitor her very closely over the next week or so. It’s going to be a long road for her, but she is a strong-willed little girl and I am optimistic she’ll have a steady recovery.” McAndrew is fostering Hope through her healing process and is giving around-the-clock care.

In addition to working to save Hope’s life, Brother Wolf has been working with the Newport Police Department to help bring her abuser to justice. Anyone with information about Hope’s case is urged to call (423) 623-5556.

“We’ve been blown away by the incredible support we’ve received to help Hope in her recovery,” says Lodato. “Medical care is our biggest expense each month and we’d never be able to provide this level of care without community support.” Make a lifesaving donation towards the care of Hope and other animals like her at www.bwar.org/donate.

Hope is just one example of the animals in Brother Wolf’s care who are in the process of healing from their own emotional or physical traumas. In January, a dog named Nova was brought to Brother Wolf by a good samaritan who had convinced a breeder to surrender her. She was nearly hairless from mange and bloated from parasites. Thanks to the dedicated care of staff and her foster parents, Nova made a full recovery and was recently adopted into a loving home.