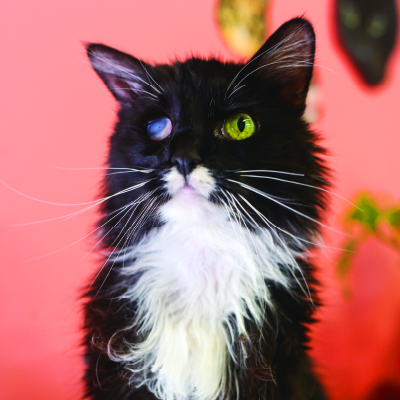 When Pennyworth was found she had been living as a stray and one of her eyes was severely infected. The shelter that took her in discovered that she has feline leukemia (FeLV). They reached out to Brother Wolf to help. It was clear that Pennyworth had been living outside as a stray; one of her eyes was severely infected and her body was in poor condition.

One of the biggest misconceptions about feline leukemia, which suppresses a cat’s immune system, is that it’s an automatic death sentence. The reality is that they can live long, joy-filled lives. We’re happy to be able to be able to help dozens of cats with FeLV find loving, adoptive homes each year.

Brother Wolf’s medical team began treating Pennyworth’s eye and nursing her back to health. While recovering, Pennyworth quickly became a staff favorite! Her sweet disposition was infectious. She loved to be held by staff members, and she always purred when receiving attention. 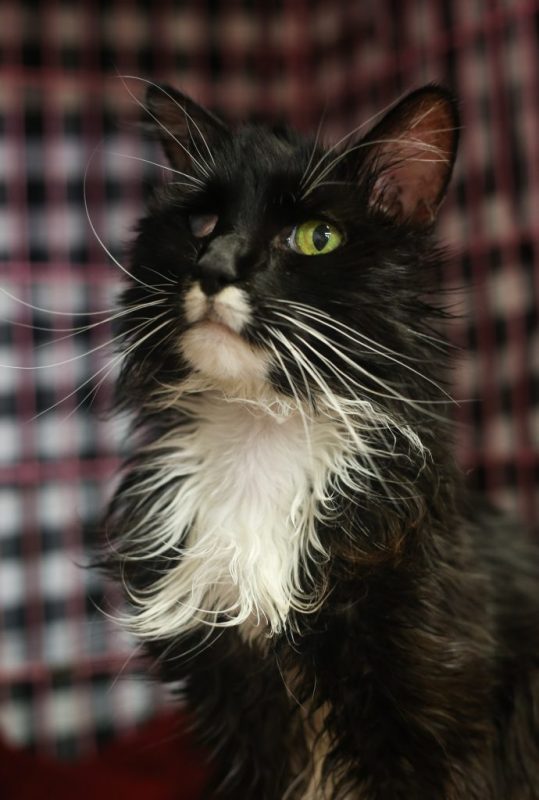 “She has a very charismatic personality,” shared Heath, a Brother Wolf staff member. “When you sing to her, she makes biscuits!”

We received a call from a woman who had seen Pennyworth on our website and wanted to meet her in person. She and her husband had several other cats with FeLV at home, and they believed Pennyworth might be the perfect addition to their family.

Pennyworth’s friendly nature immediately won the visitor’s heart, and she was adopted that same day! “Pennyworth is a sweet cat who loves human attention. If she finds herself alone in the living room, she will come in search of my husband or me,” said her new mom. She now spends most of her time napping on the couch, curled up with her new parents, or enjoying the warmth of a sunny window.

Every animal deserves a loving home. Thanks to your support, Brother Wolf is able to provide the extra TLC and time it takes to find animals with special needs their perfect forever family!